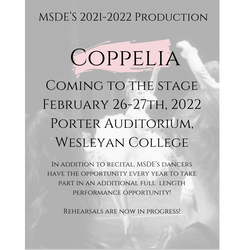 Download File
Coppelia Synopsis
Act 1: A Village Square in Galicia
The villagers are preparing for the Harvest Festival. The celebration is momentarily interrupted by Dr. Coppelius, a local toy-maker and self-proclaimed magician, whose mysterious "daughter" causes a quarrel between Swanilda and her friends. The villagers, after continuing the celebrations with a czardas, disperse to await the Harvest Festival the following morning. Meanwhile, Swanilda and her friends investigate the strange toy shoppe of Dr Coppelius.

ACT II
Inside Dr Coppelius’ House – that evening
Swanilda and her friends search for the girl they saw earlier in the window. However, Dr Coppelius returns and finds them in his toy shoppe! The friends express interest in Dr. Coppelius’ toys and thus he proceeds to give them a tour of his toy shop. Swanilda hides and proceeds to dress up as his daughter, Coppelia, who they’ve now discovered is not his daughter, but a doll! Coppelius is fooled by Swanilda and thinks his mechanical doll has come to life. Swanilda and her friends’ deception eventually comes to light and Dr Coppelius is broken-hearted.

ACT III
The Harvest Festival- the next day
The day of the celebration has arrived and Swanilda and her friends invite Dr. Coppelius to take part in the celebration with them. With acknowledgement to the Hours in the Day, Dawn, and Prayer and a Maypole Dance, the gathered villagers celebrate the pageant day with joyous dancing.

Each year, The Madison Studio offers a variety of performance opportunities for its students and Ensemble dancers. These include beautifully-staged public productions of classic ballets such as ​Le Corsaire, Giselle, Coppelia, Don Quixote,  and Sleeping Beauty, and in 2010, selections from “Swan Lake” with Guest Artists Faith Madison from Colorado Ballet in Denver, and Giselle diBlasi Pugh and Julius Lagare from Atlanta Festival Ballet, and in 2011 our three Ensembles were featured in their Repertory Program.  In 2011, we were proud to present in collaboration with Academy of Dance, Warner Robins, a benefit performance for The Wounded Warriors Project, raising over $2,500. We have also presented ‘The Night Before Halloween’, ‘Curious George’, and ‘The Who Who Gained Hope’ with choreography by Jay and Cristin Jernigan, ‘Holiday Happiness’, and in 2012 and 2014 ‘Fall Into the Holidays’.  Our original story ballets based on 'Alice in Wonderland' and 'Madeline' were presented in 2014 ('Alice') and in 2016 (​'Madeline & Company') We also have for-parents-only showcases held at the studio, seasonal samplings, and on-site performances at area festivals, special events, senior centers and other locations, as well as our studio-wide Annual Recitals, held in late May/early June.